The cnvrg platform uses Docker containers to create environments that ensure reproducibility throughout machine learning (ML) pipelines. A Docker container image is one of the main building blocks that cnvrg requires to execute a job. A cnvrg job can be a workspace, experiment, flow, endpoint, or web app.

The cnvrg software affords its users the flexibility to set their environment exactly as required by providing them the ability to:

Every team and user has full control to build or use custom Docker images. In some cases, a user may want to use a custom library without building a Docker image. To do so, use requirements.txt and prerun.sh files.

The topics in this page:

The environment for every cnvrg job contains a selection of useful environment variables that users can access as part of their scripts and experiments.

Different use cases require access to a custom library instead of a new custom Docker image.

There are some cases when a user wants to use a different version of a library or a package that isn't installed on the machine or included in the Docker image.

To support this use case, cnvrg offers an easy solution. If a requirements.txt file exists in the project root directory, cnvrg installs the packages listed in the file before the workspace or experiment starts.

Complete the following steps to use a requirements.txt file:

If creating the file in a local environment, ensure to sync the file to cnvrg or the Git repository.

To generate requirements.txt of the similar format for custom libraries in a project, run:

When using cnvrg to run experiments or to start a notebook, there are some cases when a user wants to run a bash script before starting the experiment or notebook.

To support this use case, cnvrg offers an easy solution. When the job starts, it searches for a prerun.sh file and automatically runs it before the experiment or notebook starts.

Complete the following steps to use a prerun.sh script:

There are two types of container registries in cnvrg: 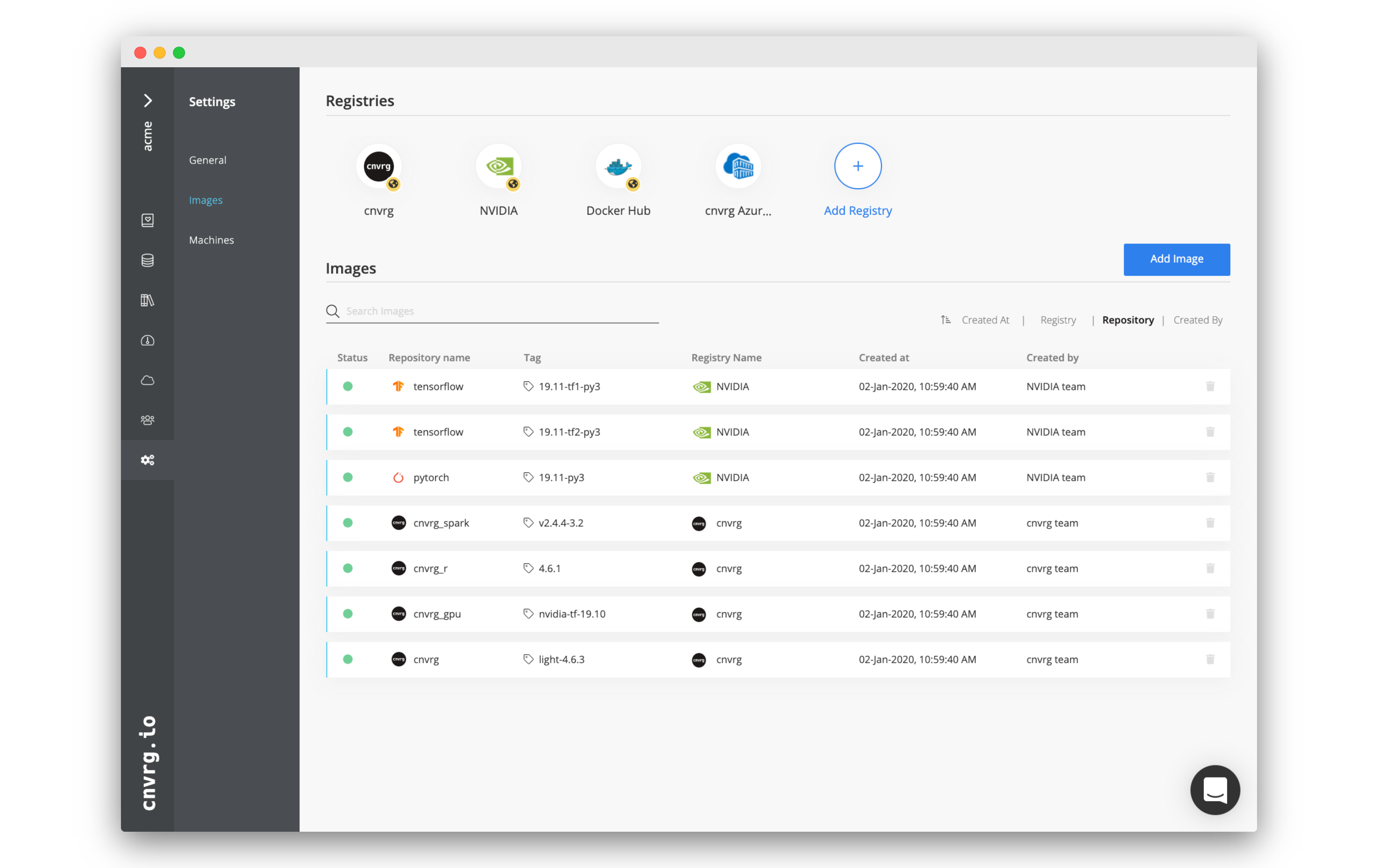 Click the Containers tab of your organization to display the cnvrg-included default registries, described in the following sections.

An organization's account is automatically connected to cnvrg's Docker container registries, which contain the default images the cnvrg team builds and maintains.

NVIDIA's NGC platform is integrated with cnvrg. Without any further setup, a user can pull all of NVIDIA's Docker images.

The cnvrg platform is connected to the official Docker Hub container registry. Users can pull images from any public Docker Hub repository by simply adding the details to cnvrg. Follow the instructions here.

To pull an image from a public registry, the best practice is to connect to it, but this is not a requirement.

# Add a registry to cnvrg 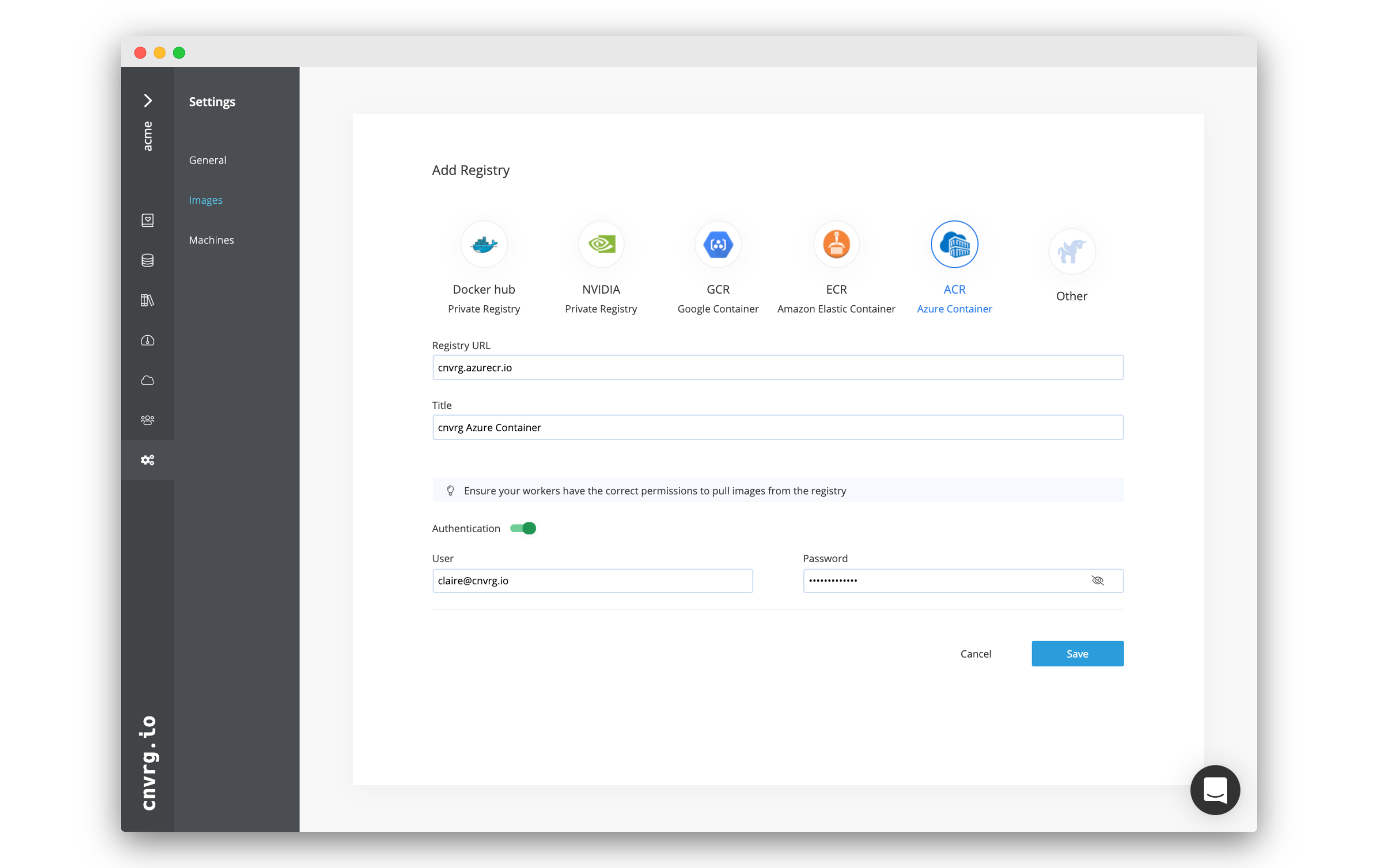 Complete the following steps to add a private or public registry to cnvrg:

Users can also add custom Docker images to use in cnvrg.

To view the images and registries within cnvrg, navigate to the Containers tab of your organization. 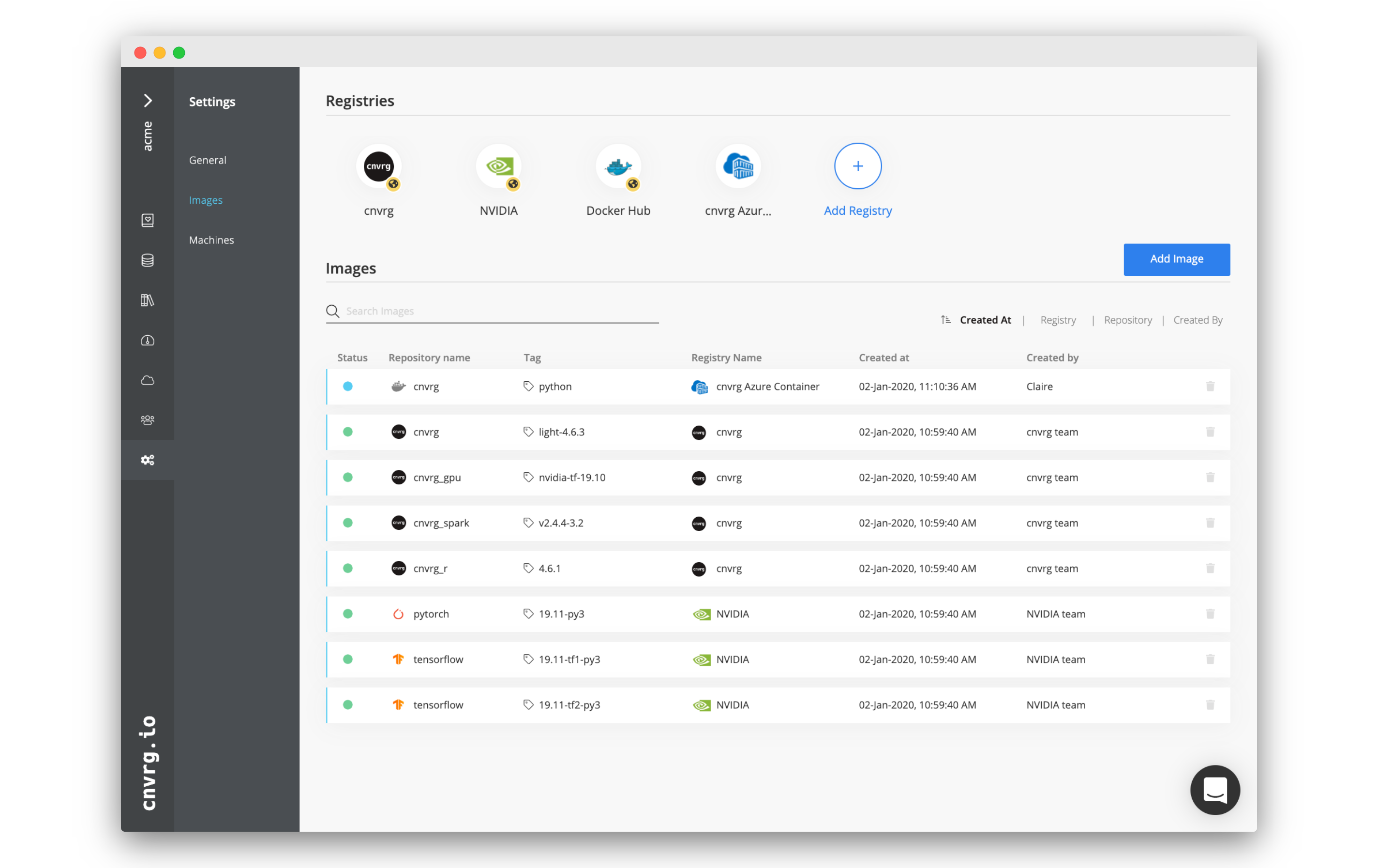 On the Containers page, the top Registries section displays the registries cnvrg has been configured to connect to.

A container registry is a storage and content delivery system, essentially a holding repository, which contains the Docker images available in different tagged versions.

Users can connect cnvrg to any additional registry to which they have access.

Click an icon to display the container registry's page. From there, edit or delete the registry as well as manage images (build and pull). 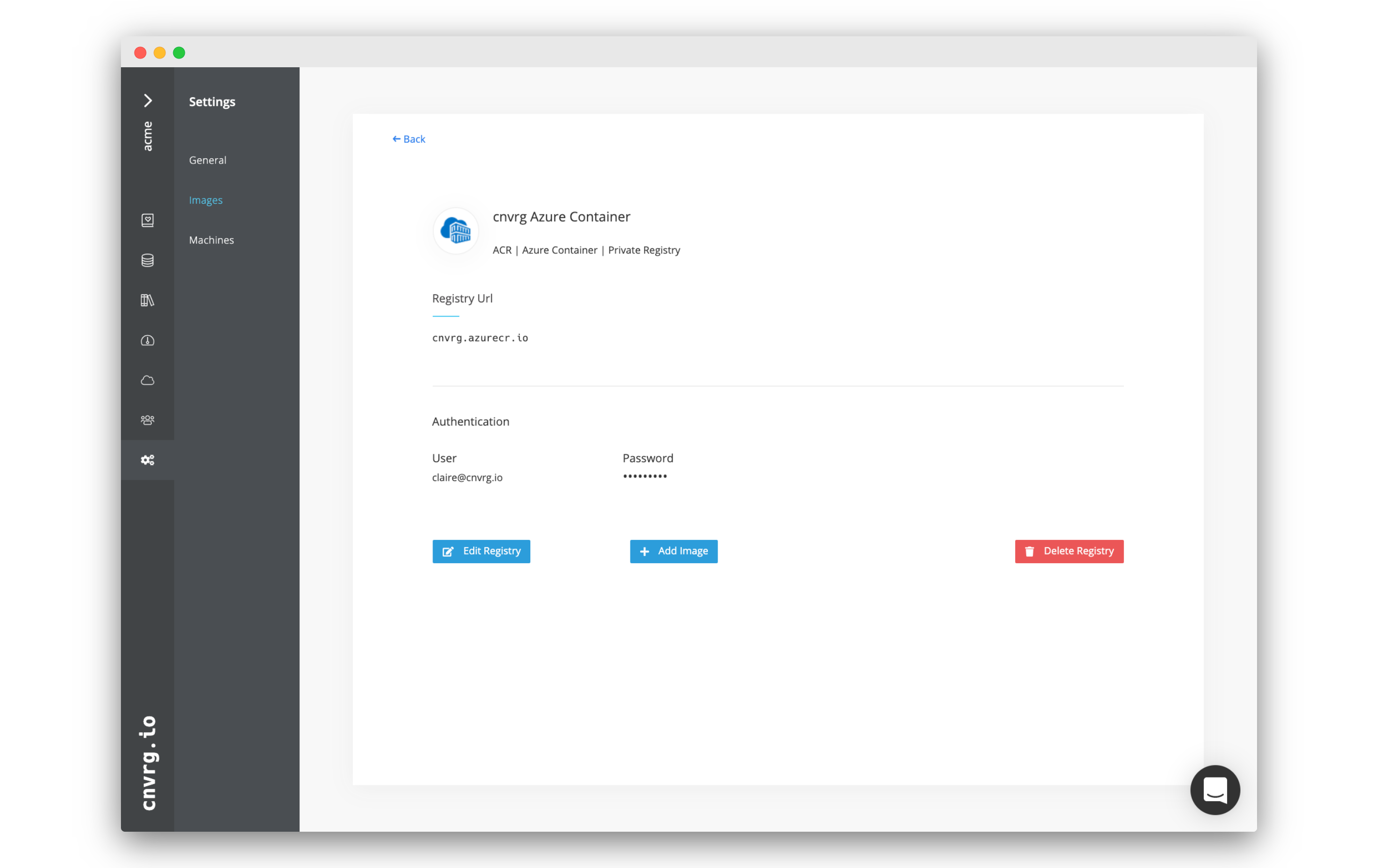 The Containers page's bottom Images section displays a table listing the Docker images within cnvrg, including both the cnvrg-provided default images (residing in the cnvrg registry) as well as user-added images.

For each image, the table displays the following information:

Users can sort and filter the data in the table.

Click an entry in the table to display a summary of the image and its readme.md file. From there, edit or delete the image. 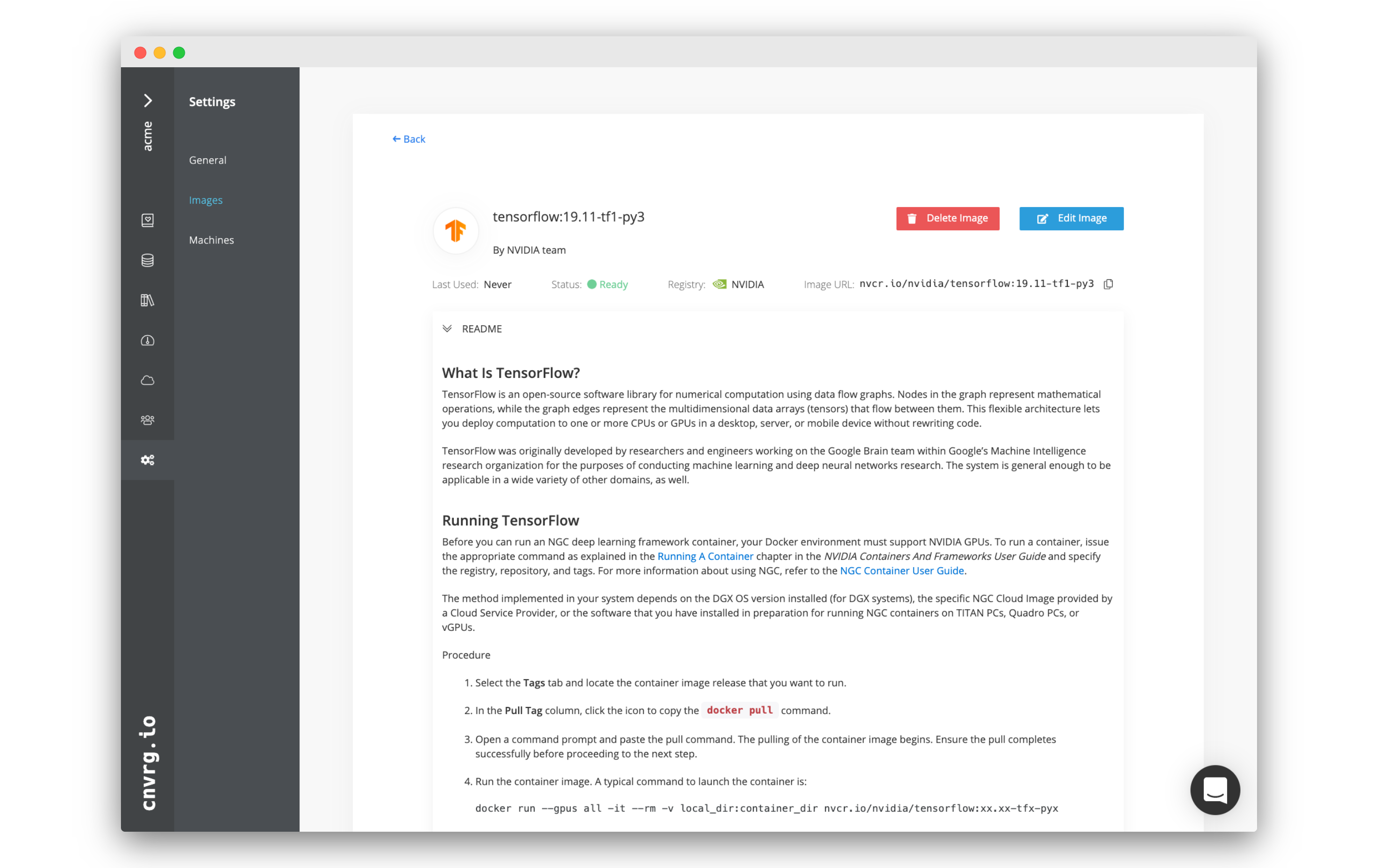 While cnvrg supplies capable, ready-to-use Docker images by default, users can add their own images, as required. 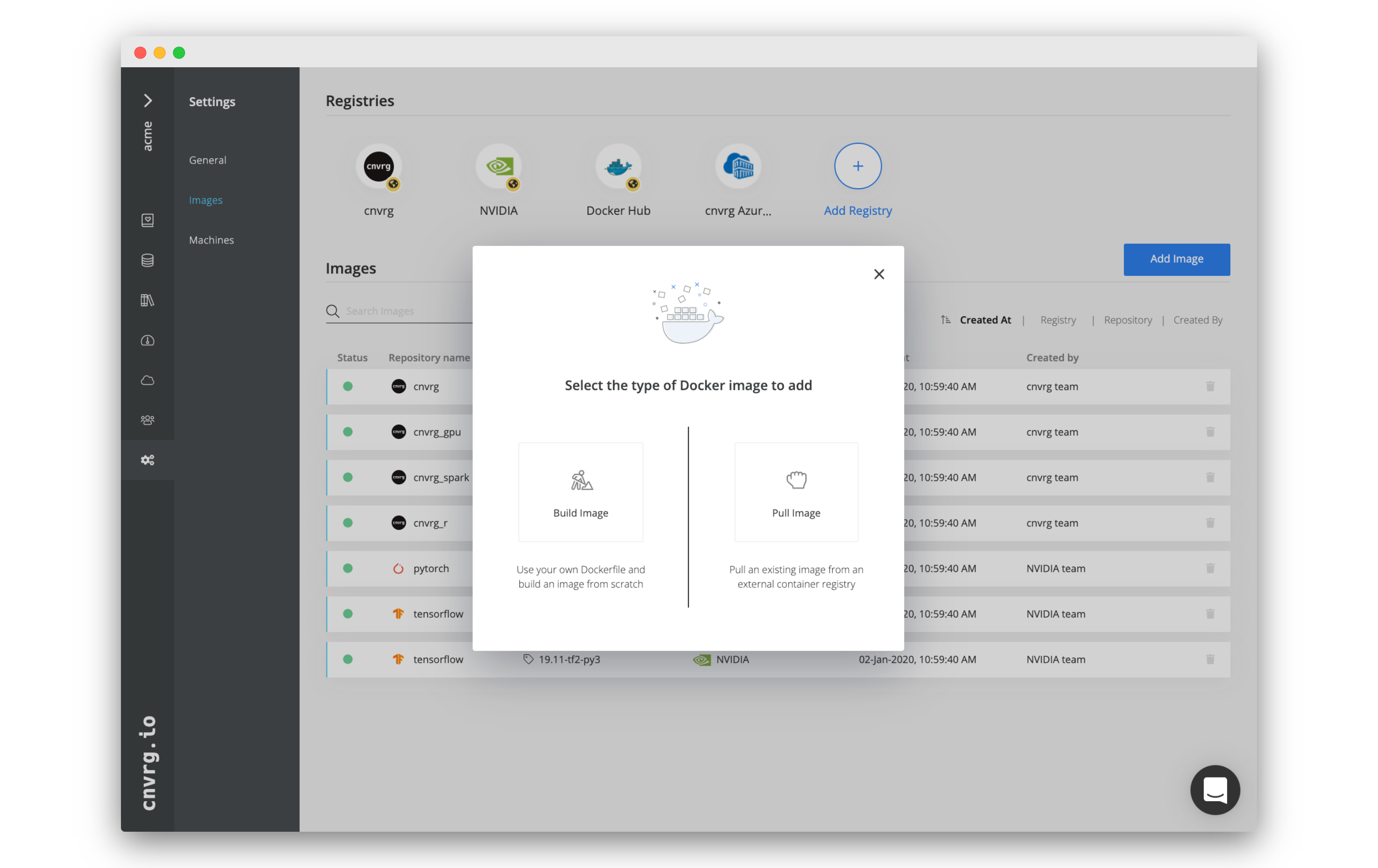 The working directory of any images used in cnvrg is /cnvrg, regardless of the Dockerfile setting. To learn the requirements for custom images, see the next Custom Image Requirements section.

The cnvrg platform is designed to simplify the use of custom Docker images. However, the following important prerequisites are required:

When using a container in cnvrg, the project is downloaded or cloned into /cnvrg. It does not need to be set as the WORKDIR in the Dockerfile.

If the Install Job Dependencies Automatically organization setting is enabled, a custom Docker image automatically works with all of the cnvrg jobs like workspaces, experiments, and endpoints. This includes the cnvrg SDK. The toggle for this feature can be found in an organization's settings.

In cnvrg, users can build and pull their custom Docker images. 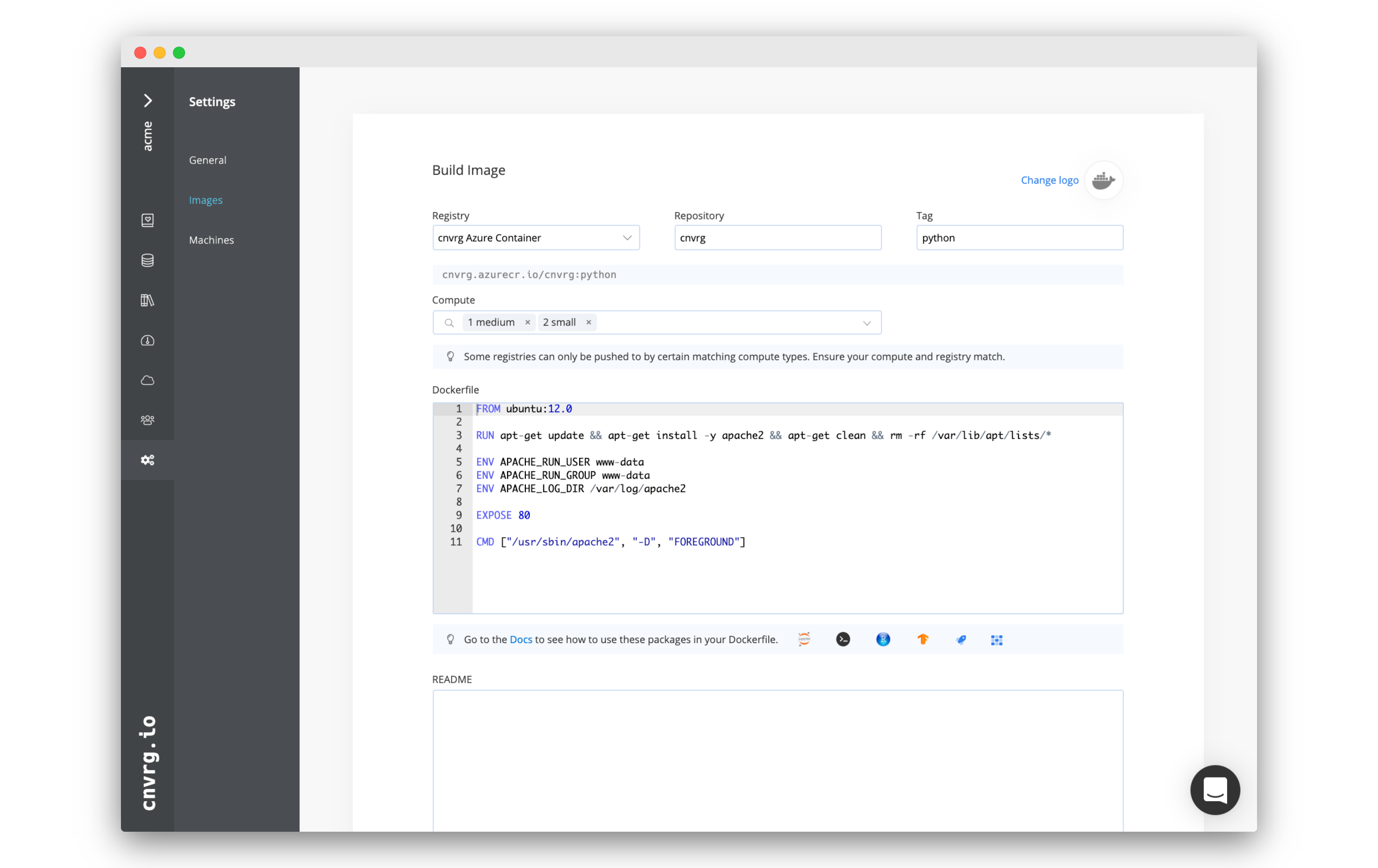 Complete the following steps to build a custom Docker image:

Cnvrg builds the image, pushes it to the relevant repository, and adds it to the list of available Docker images. 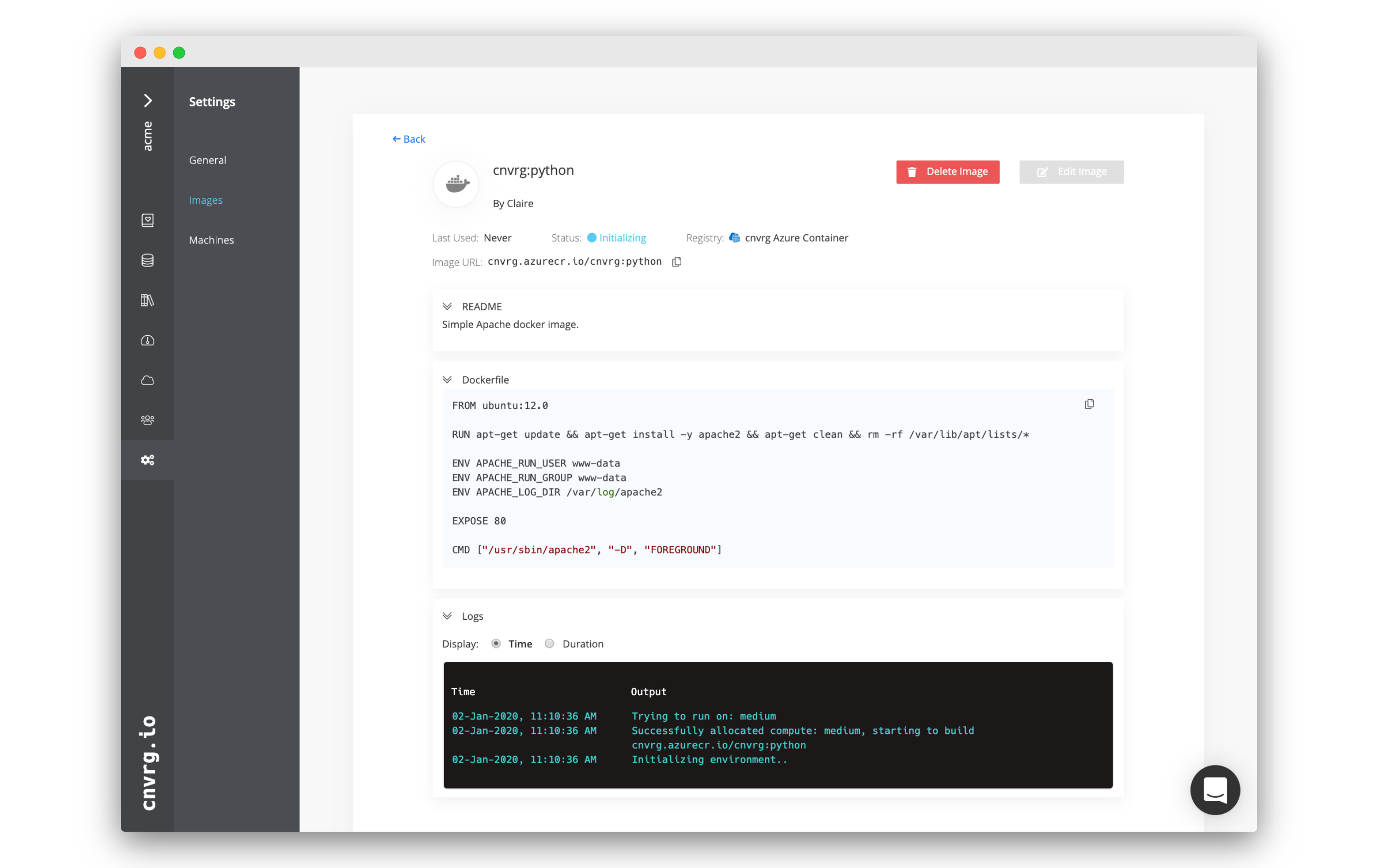 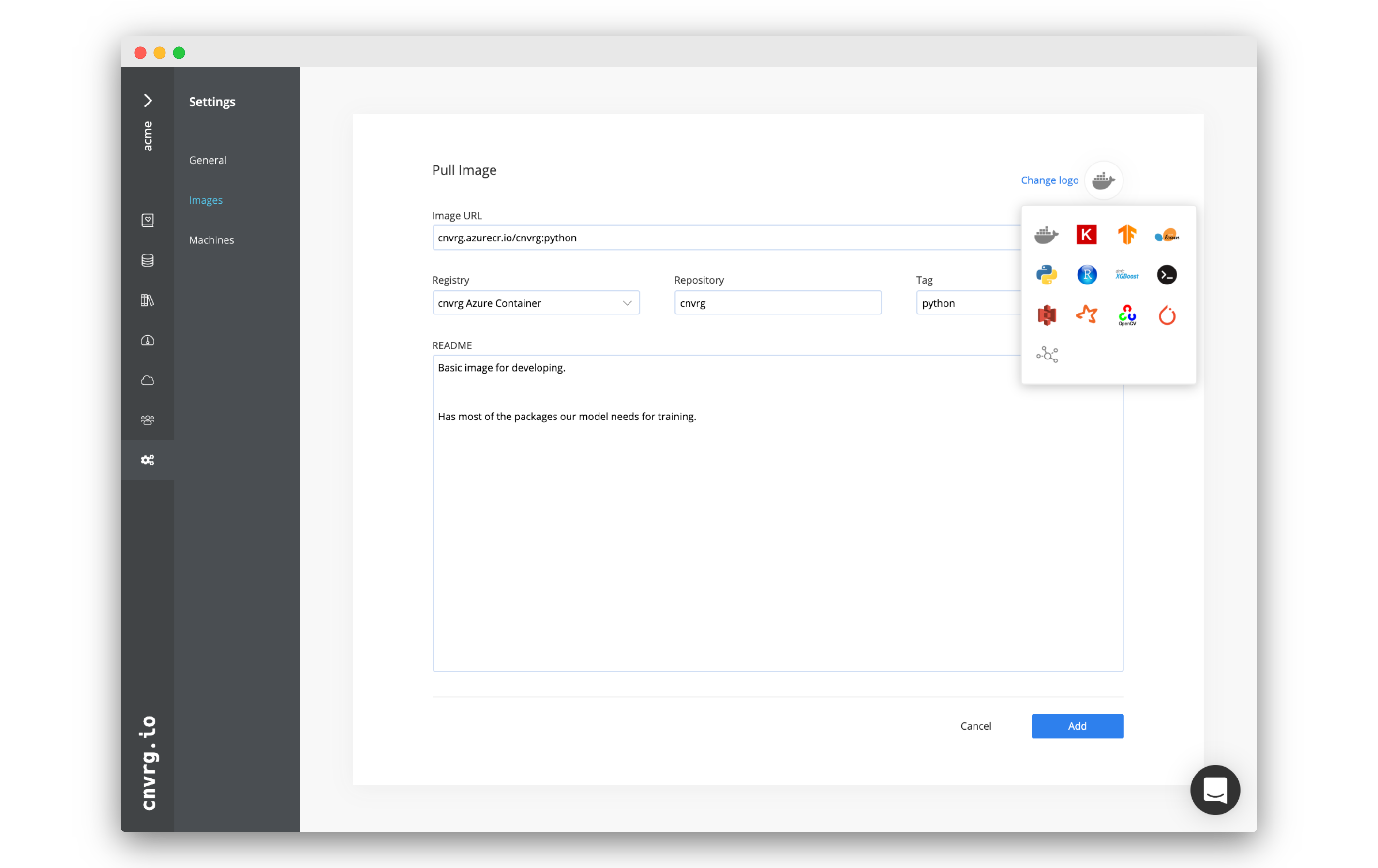 Complete the following steps to pull a custom Docker image:

Cnvrg adds the image to the list of available Docker images.

If using on-premise hardware with cnvrg, there are a few differences in the Docker image process.

If building an image on an on-premise compute, users have the option to not push the image to a registry. In this case, the image is built and available locally for use on the on-premise hardware.

Users can still push the image, as desired.

To use a specific Docker image on on-premise hardware, users must first ensure it is available locally on the machine. Then, add the Docker image details and select the Pull from existing repository option.

There are three ways to select a Docker image for a cnvrg job:

Cnvrg always pulls the latest version of the Docker image and tag as selected for the job.

Users can use the cnvrg UI image selector to choose a Docker image when starting a workspace, preparing a flow task, creating a new experiment, or deploying an endpoint from the web UI. 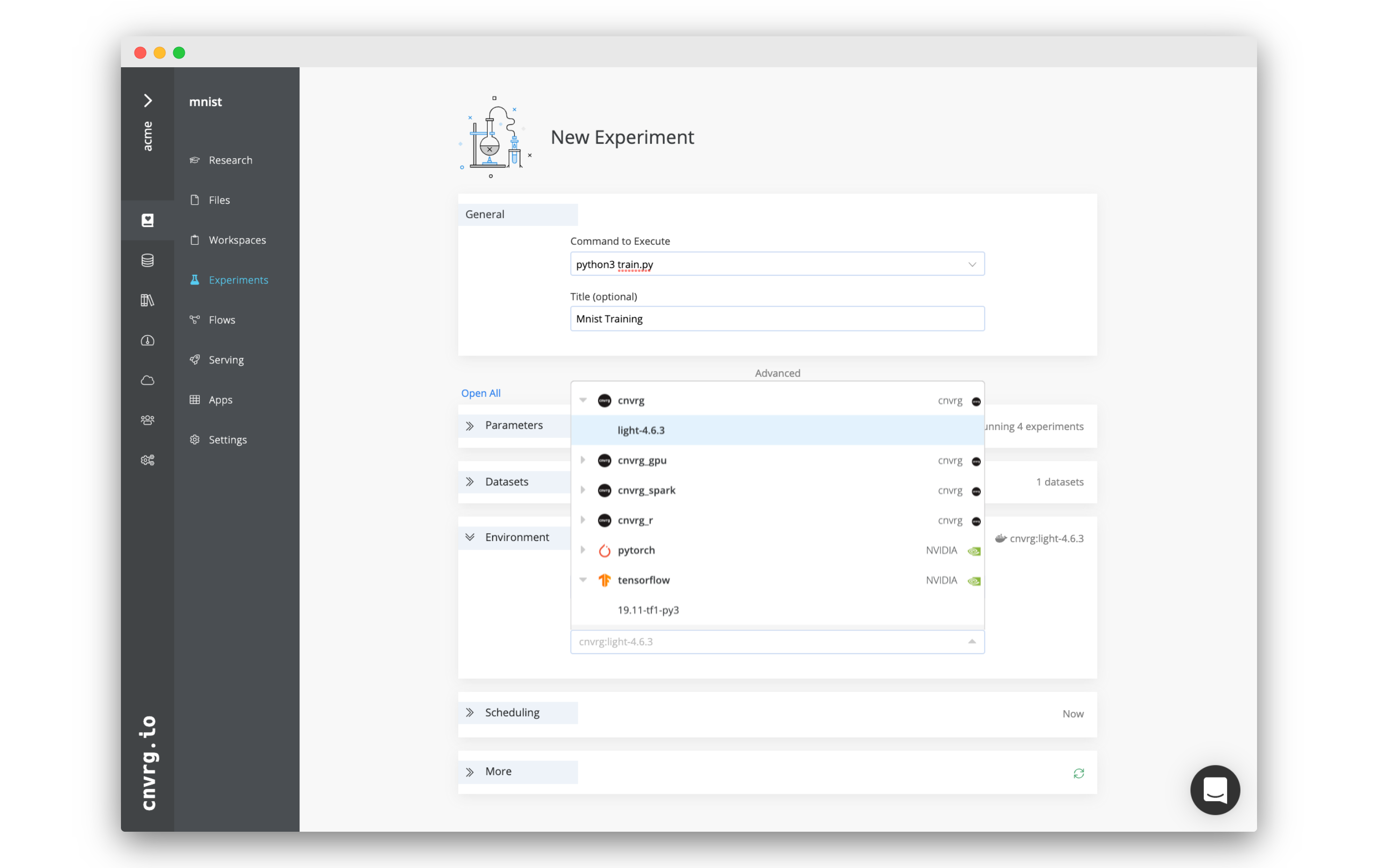 Complete the following steps to choose an image using the image selector:

The selected image will be used as the virtual environment.

The image selector is located in the Environment section for experiments and in the Advanced tab for flow tasks.

To use a new image through the CLI, add the --image flag in the run command. For example:

In the run() SDK call, pass the name of the image. For example:

There are cnvrg recommendations and required packages depending on whether the organization setting Install Job Dependencies Automatically is enabled or disabled.

While not required, the cnvrg team recommends users install the cnvrg CLI in their Docker image so they can use all of the CLI commands. Otherwise, the CLI can be used only in the folders /cnvrg (the workdir) and /data (where datasets are mounted).

To use Git easily inside a JupyterLab workspace, the team also recommends users install the JupyterLab Git extension.

If the Install Job Dependencies Automatically organization setting is disabled, users must install the required packages themselves. They also cannot use the cnvrg CLI and SDK unless they install these themselves.

The following table lists the required packages to install for each feature to use with a custom Docker image.

You may need to scroll horizontally to see the full table.

The following code snippets are examples, which may not work in a particular Dockerfile.

Use your terminal to run the following example commands, if applicable and required.

The simplest method is to build an image based on a Rocker image.

The simplest method is to build an image based on the official R Shiny Rocker image.

Users can set up their own custom Python modules within cnvrg. To avoid any issues, apply the following best practices when setting up custom modules:

If a project is connected to a Git repository that contains submodules, the following prerun.sh file must be added to the repository or Files. Also required is an OAuth Git token set for the user account.

If a user has not already, create a prerun.sh file and then add the code snippet below.

Use the following command to add to the prerun.sh file:

A prerun.sh script allows users to run commands to further customize their environment at the start of every job.

First, use a machine with the cnvrg CLI installed. Locate the password/token from the .netrc file using the terminal and the cat command:

In the script being created, add the following lines:

Thus, any cnvrg CLI commands now work as part of the script.

Then, use this authentication to automate the following commands:

If unsure of the API URL, refer to the CLI documentation.