cnvrg is a full-stack platform, designed to simplify every aspect of your workflow.

One important part of a data scientist's work is presenting it to others. That project you’re working on won’t progress if you can’t effectively communicate your achievements. cnvrg simplifies this task.

cnvrg works easily and seamlessly with three major data communication platforms so you can use the application (app) most convenient and efficient for your and your team’s needs.

The topics in this page:

Shiny is an R package that simplifies building interactive web apps straight from R. You can host standalone apps on a webpage, embed them in R markdown documents, or build dashboards. You can also extend your Shiny apps with CSS themes, htmlwidgets, and JavaScript actions.

Learn how to use R Shiny.

Complete the following steps to set up an R Shiny dashboard:

The R Shiny file must be called app.R.

If no path is given, app.R is assumed to be in the project's parent directory. If you enter the full path (in the project) for File, for example, my_folder/app.R, then that file loads from the correct subdirectory.

The logs for the R Shiny server can be found within the compute at /var/log/shiny-server.

# Customize the R Shiny configuration with a custom image

If you want to start the server in a customized way, create a custom image and save your custom configuration file as /init. If /init exists, cnvrg uses it to start the Shiny server. Otherwise, it runs with the default server startup:

Dash is a productive Python framework for building web apps.

Written on top of Flask, Plotly.js, and React.js, Dash is ideal for building data visualization apps with highly custom user interfaces in pure Python. It's particularly suited for anyone who works with data in Python.

Through a few simple patterns, Dash abstracts away all of the technologies and protocols that are required to build an interactive web-based app. Dash is simple enough that you can bind a user interface around your Python code in a few hours.

Learn how to use Dash.

Not only does Voilà create visual graphs to make reporting easier, it also democratizes Jupyter notebooks for nontechnical users. With it, every notebook can be converted into a Voilà app. Better yet, you can create a customized dashboard with results of your machine learning project. Voilà supports Jupyter interactive widgets, including roundtrips to the kernel. It improves the conciseness by prohibiting arbitrary code execution by dashboard consumers.

Other benefits of Voilà are that it is built upon Jupyter standard protocols and file formats, and works with any Jupyter kernel (C++, Python, Julia). This makes Voilà a language-agnostic dashboard system. Additionally, extensible Voilà includes a flexible template system to produce rich application layouts. That means you can easily customize your dashboard based on the Jupyter notebook being deployed. 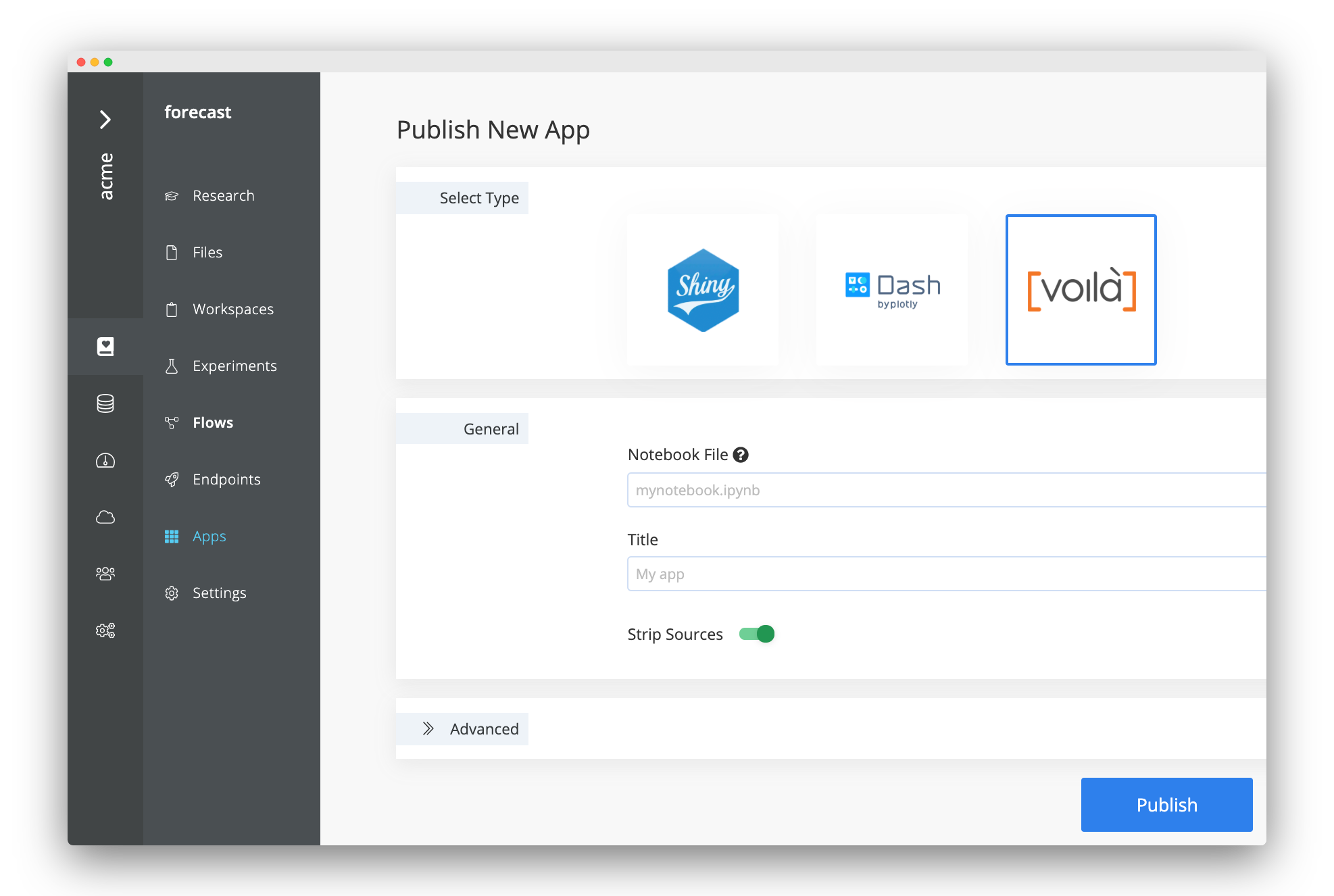 Complete the following steps to deploy an app: 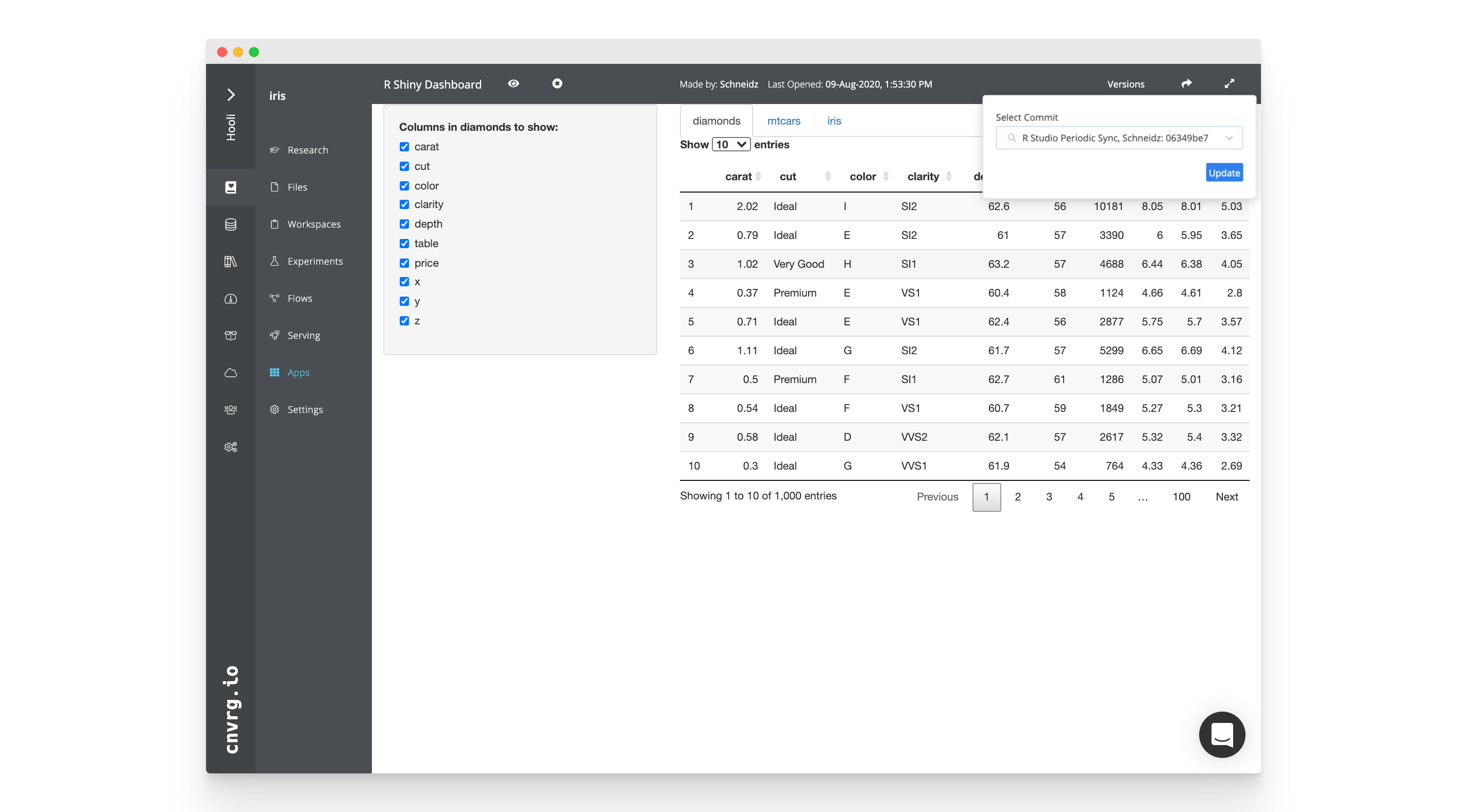 You can update a deployed app without redeploying from scratch. Complete the following steps to update an app:

When connected to Git, clicking Update also pulls the latest Git commit for your branch (even if you do not choose a new cnvrg Commit).